Yesterday night I was walking around Kowloon site of Hong Kong and saw a couple of so called “Mini Buses” that were showing hundreds of Android smartphones on an ad that was obviously promoting just Android. Check it out: 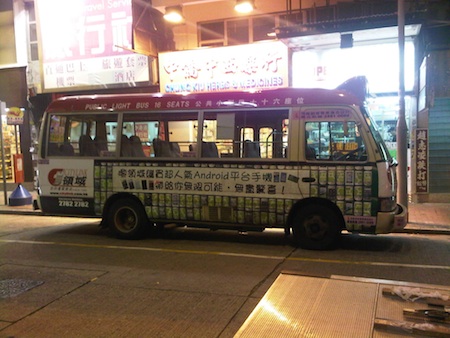 Zoomed in a bit further, you can see that there are loads of little droids on the banner. Though, I don’t quite understand what the app is talking about (my Cantonese / Chinese reading is nearly not existing) I reckon that ad is there to just advertise for Android.

With a smartphone penetration of 58% (if I remember correctly), every second mobile in Hong Kong is a smartphone. While the iPhone is still the main smartphone used for personal and the BlackBerry for business life, Android phones are getting more and more popular – like everywhere in the world. Most of those new Android phones are built in Asia anyway and therefore, they hit Hong Kong very early after being released publicly.

If you have a nice Android picture in real life, let me know. I might put it up as well 😉